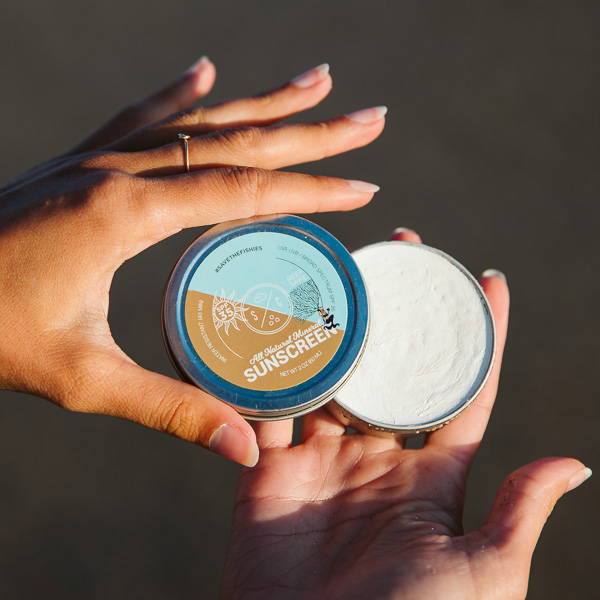 SUNSCREEN IS PACKED WITH HARMFUL CHEMICALS.

The most common sunscreen chemical, Oxybenzone, was found in 96% of the population by a recent study by the Center for Disease Control and Prevention. This is especially alarming since oxybenzone is considered an endocrine disruptor, which can reduce sperm count in men and may contribute to endometriosis in women.The EWG warns against using oxybenzone, especially on children or pregnant/breastfeeding women.

Of the 1,400+ sunscreens tested by the EWG, only 5% met their safety standards, and over 40% were listed as potentially contributing to skin cancer.What about spray sunscreen? It's a little better, right? NOPE. Although a popular substitute for typical sunscreen in recent years, it has additional dangers, especially if inhaled. Consumer Reports warns that spray sunscreens should not be used on children and that adults should exercise caution and make sure not to use on the face or inhale them.Many sunscreens also contain methylisothiazolinone, which the American Contact Dermatitis Society named as its “allergen of the year.”What's even crazier is that the EWG’s most recent report listed Neutrogena as the #1 sunscreen brand to avoid, citing high concentrations of oxybenzone and other hormone-disrupting chemicals, and misleading claims about their SPF levels.

SUNSCREEN IS DESTROYING OUR OCEANS.

Yes. You read that right. It's so bad for the environment, The Key West & Hawaii banned the sale or distribution of any sunscreens containing oxybenzone or octinoxate (majority). Typical sunscreen bleaches, deforms and damages the DNA of coral reefs when it washes off beachgoers into the ocean. Ultimately this process kills a necessary element for marine life. According to the National Oceanic and Atmospheric Administration, "coral reefs are vital members of marine ecosystems that protect beaches from erosion and support biodiversity."

I took this sunscreen with me to El Salvador for a month. I can say with out a doubt this product is worth every cent! I absolutely love it and it lasts a long time:) I never broke out nor did I get a single pimple from this sunscreen. I will be buying more soon!

I used my new sunscreen at the lake this weekend, and no burns!! It feels great on, not greasy or sticky, and I love knowing I'm supporting a company who cares.

Easy to carry on trips

I like how small and easy to carry this product is. The tin contains a dense amount of product so a little goes a long way, making it convenient to carry with you to the beach or pool. Used this product on a recent cruise I took. I appreciated not having to carry a huge bottle of sunblock. Instead this small tin was all I needed.

Watch the video to see why...

SHOP TOWELS NOW TO GET YOUR FREE SUNSCREEN

When you purchase our products, you help to preserve our marine life.  10% of our profits go toward marine conservation.